The Rolls-Royce and Bentley syndrome is so well developed in this country that we remain almost totally unaware of British makes comparable to these cars in engineering, quality and desirability that have Full Classic® status.

Such a car is the Lanchester which in its post-World War I models quite consciously aimed at the Rolls-Royce market. Few of us in this country have ever seen one.

In 1895 Frederick W. Lanchester built the first completely original British car, while still in his middle twenties. It owed nothing to convention and pioneered a string of innovations that foreshadowed a great many of the features that we take for granted in our present day cars. With the support of his two very able brothers, George and Frank, the first car was refined into a very practical but still unorthodox model that was put into production in 1901. From then until the beginning of World War I, Lanchesters were built to Fred’s designs, progressing from two to four to six cylinders, and developed a very loyal following for their comfort, practicality and reliability while remaining unconventional in both engineering and appearance.

But the Lanchesters apparently had a continuous struggle with a not very supportive board of directors and Fred left the company before the war began. His abilities were recognized, however, by other manufacturers and his inventions were adopted by several car companies. A man of many interests, he went on to pursue a career of varied aspects from art and music to aeronautics, in which he had been interested even before he built the first car. He was inspired to build it partly because he realized that no practical power source existed that was light enough to use in an airplane.

The Lanchester company continued and throughout the war period under George Lanchester developed armored cars (that were the only ones comparable to those of Rolls-Royce) and produced other war material.

Immediately after the war the company returned to automotive production. It was obvious at this time that a car of more conventional style was necessary for continued commercial success and by August of 1919 a new model, based on a chassis design developed by George Lanchester in 1914, was ready for testing. This was known as the Lanchester 40 and was produced for the next ten years as a direct competitor to Silver Ghost and Phantom I Rolls-Royce and other big British cars such as Daimler, Armstrong-Siddeley and Bentley.

This new Lanchester carried a six-cylinder engine of 4-inch bore by 5-inch stroke with single overhead camshaft, developing about 95 hp from 6.1 liters (372 cid), considerably more than the 7.4 liter Silver Ghost Rolls-Royce, and it was equally as large with wheelbases of 141 and 150 inches. In the past Lanchesters had employed cantilever springs both front and rear, but now the front end was mounted on semi-elliptics, very long and flexible, giving riding qualities almost like the earlier cars. The drive line continued to use a three speed epicyclic gear box (more like a modem automatic than a Model T Ford – no bands) and worm drive. Unlike Rolls-Royce, Lanchester preferred to design and build its own bodies, although bare chassis were also available. The factory-built bodies were of advanced construction, using a duralumin framework, and while definitely British in flavor, to my eye they have better lines and proportions than their contemporaries. The Lanchester radiator design suggests an attempt to merge the curves of the Minerva with the angles of the Rolls-Royce. It was tilted backwards at a slight angle and incorporated a small window for checking the water level.

All told, the Lanchester 40 was a worthy competitor to the Rolls-Royce at a comparable price and some reviewers liked it better. It apparently sold in substantial numbers although not approaching those of Rolls-Royce. Brewster imported the cars in 1921 and 1922 at a price of $11,000 for the chassis. They were shown at the New York Salon in those years but disappeared thereafter.

In 1923 this imposing car was joined by a smaller model known as the 21hp, obviously to compete with the Rolls-Royce 20 hp. The 21 had a 183 cid engine (2982 cc) developing about 60 hp. In many ways it was a scaled-down version of the 40 hp but the engine had a detachable cylinder head, the traditional epicyclic gearbox was replaced by a four-speed conventional type, and four wheel brakes were standard. The directors decreed wheelbases of 129 and 133 inches over the objections of George Lanchester who realized that such lengths would lead to the use of overweight bodies and detract from the car’s performance. In a year or so, through an increase in bore, provision for which he had provided in the engine design, the additional power needed was obtained. This model was continued until the Lanchester company was absorbed by Daimler in 1931.

In 1928 a still more refined big car was introduced. Its engine shared the cylinder dimensions of the 21 so that there was some interchangeability of parts, which helped keep the price lower than that of the 40. Some critics consider this car the best of all Lanchesters. It was still a very large car with wheelbases of 133 and 142 inches, and carried excellent bodies both from the factory and custom builders, with complete cars costing in the 2000 pound range.

The 30, as this model was called, lived only about three years, as in 1931 the Lanchester company was hastily absorbed into Daimler and existing models were discontinued. The name was applied by Daimler to a range of smaller cars at lower prices, none of which can be considered Full Classics®.

About 1936 a number of large cars were produced for Indian princes and British Royalty who demanded the Lanchester name. But these were really chassis from the large Daimler range with Lanchester frontal appearance. Surviving Lanchesters are not numerous even in the British Isles. A listing published thirty years ago in Britain showed less than forty to exist in the three big models of the twenties. Our Club Roster shows none, but I am able to picture a 1921 Phaeton which ran on the Glidden Tour in 1947 and hopefully continues to exist somewhere in the country today. Still another old directory of 1961 carried a listing of a 40 hp chassis and the Blackhawk collection in California displays a 40 hp limousine formerly owned by an Indian potentate which is so ornately decorated as to be almost unrecognizable as a Lanchester. These three, plus a 1913 Lanchester in the Haines Collection and another early model (in Imperial Palace, I believe), five in total, seem to represent all of the pre-1931 Lanchesters in this country.

Originally published in The Bulletin 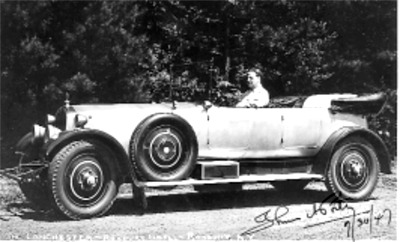 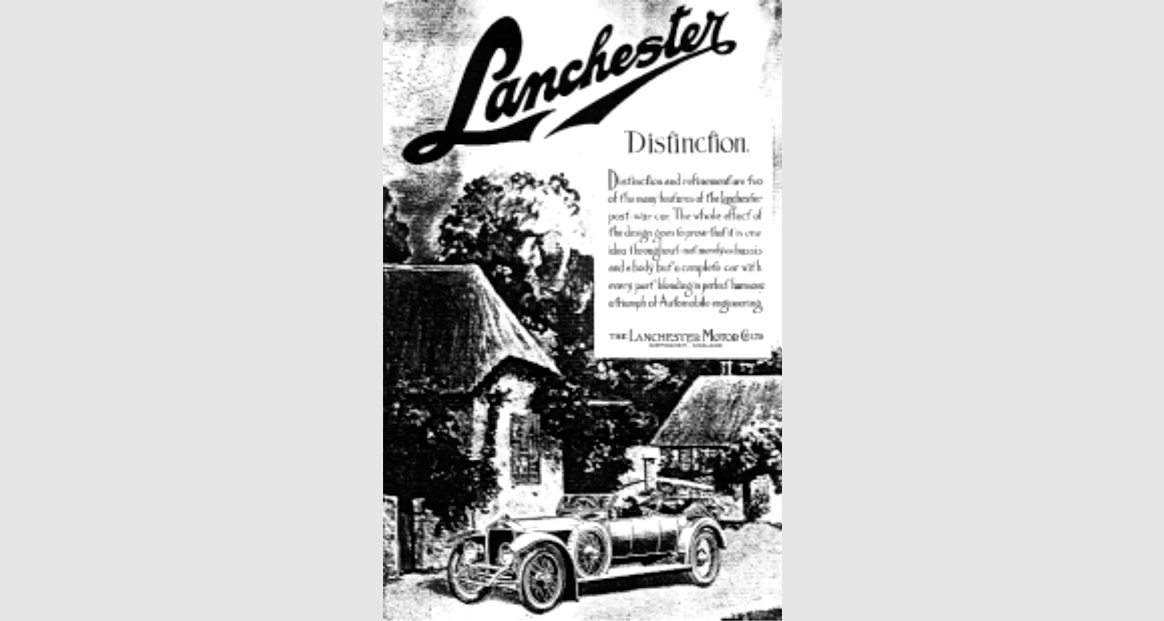