Carlo Bugatti was a sculptor and decorative arts designer working in Milan late in the 19th century. His work was highly personal style, akin to I' Art Nouveau, that may even be described as eccentric. His was a style was as different from his avant-garde contemporaries and as unusual as that of Charles Rennie Mackintosh of Glasgow. Of his two sons, Rembrandt was a brilliant sculptor of animals executed in bronze in a manner that could show the vitality of his subjects without cloying realism. The other son was Ettore, born in Milan in 1881.

Ettore studied sculpture in art school, studied engineering briefly and then joined the firm of Deutz in Alsace. While there he learned the basics of machining and metalworking here, eventually he became the designer of a car Deutz put into production.

By 1909 Bugatti set up his own facility to produce cars in Molsheim, Alsace, then a part of Germany. He was familiar with the products of the best of French and German auto builders and was convinced that he could do better. The fashion at the time was to obtain more power by making engines bigger to achieve greater speed, but engines got heavier, they stressing chassis frames, challenged brakes that were already inadequate while running on tires that were fragile and unreliable.

Bugatti's answer to this mechanical confusion was a car designed as a whole. His mission was to build a car that was easier to steer on bad twisting roads powered by an engine that was efficient enough to handle hills and achieve reasonable speeds without the burden of unnecessary weight. In so doing he set a standard of mechanical orderliness and he created mechanical jewelry in the process. As a consultant, Bugatti designed a small four-cylinder car for the French firm Peugeot. It was probably intended for a budget conscious market, but being a Bugatti it cost too much to produce and it never became a commercial success.

By 1910 his factory was offering a small car that had the engine and chassis features that were basic to what Bugatti considered essential and appropriate to a vehicle with his name on it. The engine was four cylinders in line (later his engines would be eight cylinders in line) with valves activated by a single overhead camshaft using a delicately cast iron cylinder block with non-detachable head. The crankcase, oil sump and intake manifold were aluminum castings that were polished to perfection. The gear box was in its own aluminum case behind and separate from the clutch and this fed power through a drive shaft to the differential and rear wheels. The chassis frame was two pressed steel rails connected by steel tubes at the middle and rear and by direct attachment to the gearbox and the engine at the front. The car rested on a pair of semi elliptic leaf springs on the beam front axle and at the rear on a pair of forward facing quarter elliptic leaf springs. While this collection of parts seems ordinary for the most part, the result was an ensemble that achieved Bugatti's goal of nimble responsiveness.

A defining moment in the history of this make was a long distance race that boiled down to a contest between a 1 1/2 liter Bugatti and a 10-liter giant racer. In this race Goliath was the winner, but the Bugatti persevered with the fewest stops for fuel and tire changes. The event showed that a small, well-designed and prepared car had the stamina to make a good showing against heavy odds. At about this time Bugatti acquired thoroughbred horses that he considered examples of animate perfection. He extended this standard to his cars that he called "pur sang" – pure blood or thorough bred. Understanding that a car's radiator became an immediate brand identifier, a logo, he chose the horseshoe shape as his cars' icon.

Customer demand for cars with four seater and closed bodies resulted in larger chassis and eight cylinder engines. These changes lent themselves to cars for sporting events and by the early 1920s Bugatti was ready to try his luck in the arena of open wheel grand prix racing. Most racing cars of this period had bodies of aerodynamic shape that usually took the form of a cigar. Bugatti's first effort followed this trend. His second design was an airfoil as seen from the side. Its bulges to allow for the radiator in front and the wheels in the rear suggest an insistence on a preset shape regardless of the requirements of reality. The appearance of these cars earned them the nickname "tank" along with their mediocre performance as they were very much works in progress.

The grand prix for 1924 was to be held in the summer near Lyon in the south east of France and Bugatti needed a new car to make a good showing there. The Type 35 was his answer and it was his masterpiece. Bugatti had been designing cars since the turn of the 20th century and had developed his single overhead cam engine of four or eight cylinders set in a chassis of exceptional road holding qualities. In the Type 35 all of this experience came together in a refined whole that worked well and was a pleasure to look at. With an immaculate prepared team of five cars a brilliant debut was expected, but it was not to be. Bugatti had asked Dunlop to produce special tires to his specifications and they came apart during the race forcing the cars to be driven carefully just so that they could finish. The best the Bugatti team could do was 7th place while Alfa Romeo won the race, also with entirely new cars. Faulty Dunlop tires aside; Bugatti's design was obsolete next to the Alfas with twin overhead cam engines and superchargers, the new state of the art configuration.

However, Bugatti's grand plan set him totally apart from his competitors and from tradition: his team cars were for sale. In about a year superchargers were available on the Type 35 and its four-cylinder variant the Type 37 and by 1931 or 1932 twin overhead camshafts were standard. But the program to build and sell grand prix cars to those who could afford them allowed serious amateurs to enjoy a high level of motor sport and the numbers of cars produced meant that the name Bugatti became associated with an unprecedented tally of victories.

By the mid 1920s Bugatti saw himself as an industrial country squire. He ran a factory, a small luxury hotel (primarily for his customers), had a villa for his family and bred horses of exceptional quality. His fertile mind hatched projects that bordered on the fanciful, and often he depended on his nearly anonymous engineers to make them work. The company produced small numbers of touring cars that bore a clear kinship to the racing cars, and the most remarkable of these was the Type 41 – The Royale. This car was similar to the rest, but its proportions were vast. It was intended as a carriage for the crowned heads of Europe, but it did not sell well and only six chassis were built.

By the late '20s Bugatti's eldest son, Jean was involved in the business and his influence was apparent in some styling exercises and possibly in the decision to adopt twin over head camshaft cylinder heads. This resulted in the Type 51 grand prix car that could compete on a par with the Alfa Romeo 8C2300 Monza, and in the Type 57, a competent and refined touring car of which over 700 chassis were built, a record for Bugatti.

The 1930s were a significant change for Bugatti. His son Jean effectively took over production allowing Ettore to concentrate on other projects than cars. He designed a fighter for the l'armee de l'air using 2 twin cam five liter supercharged engines arranged in tandem in the fuselage driving two coaxial counter-rotating propellers. The French government didn't want it. He designed a high speed passenger train using the 12 liter eight cylinder engines originally intended for the Royale luxury cars. This venture was a success and the factory set up production for these trains some of which remained in service into the 1960s. Bugatti took up a residence and small design studio in Paris in the late '30s, but labor troubles at the factory had broken the atmosphere of paternalism which Ettore could no longer maintain and Jean was killed while testing a racing car just weeks before war came.

Bugatti maintained his Italian citizenship and the enemy more or less ignored him, but after the war it became known that he had been active in the resistance. The Type 101 was the post war edition of the Type 57, but only 6 were produced. Ettore died in 1947.

Bugatti's legacy is essentially the Type 35 and its variants. To hear the rap of its eight cylinder exhaust is part of the performance that is augmented by the look of these cars and the glisten of the eight spoke cast aluminum wheels as the blur of them dissolves as the cars speed by. To climb in behind the wheel is an effort since there are no doors, and the wheel is directly in one's lap with the gear and brake levers outside the body as there is no room for them anywhere else. The pedals are buried forward between the bell housing and the body as it narrows toward the front. Wide shoes won't work and the closeness of the cockpit requires the passenger's right arm to hang on behind the drivers back. The engine is immediately responsive to a touch on the accelerator pedal and guiding the car needs very little movement of the wheel. The whole effect is that of a perfectly fitting pair of boots and skis or a tennis racquet that's just the right weight. It's a masterpiece. 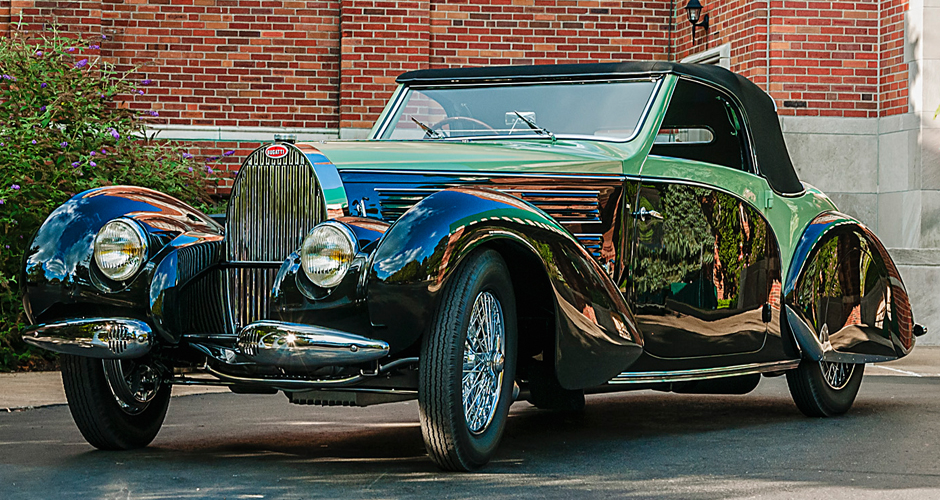 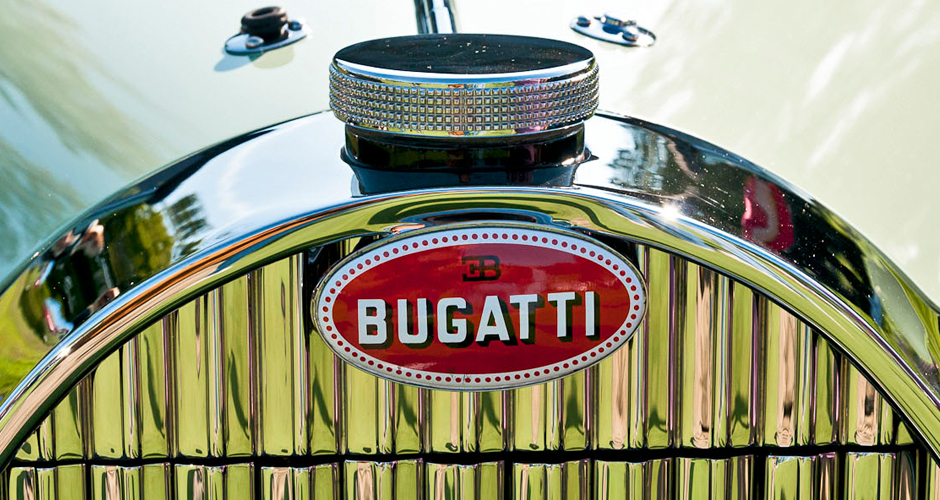 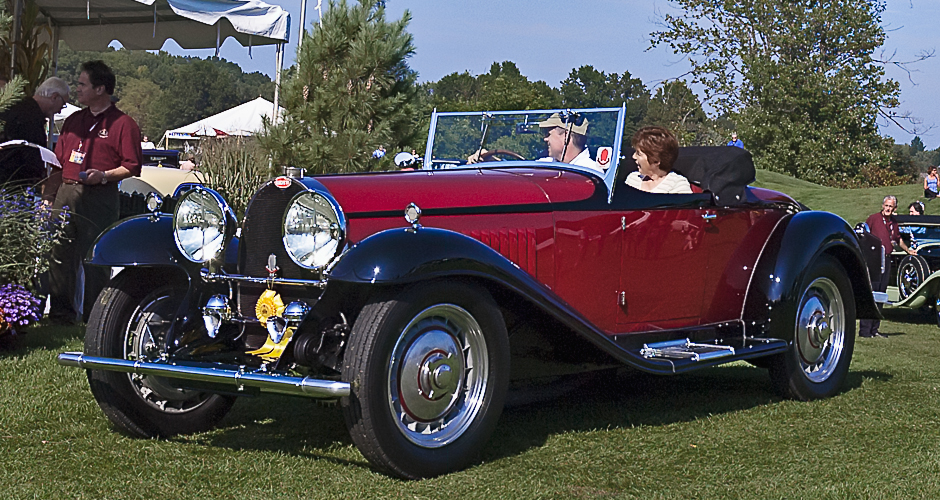 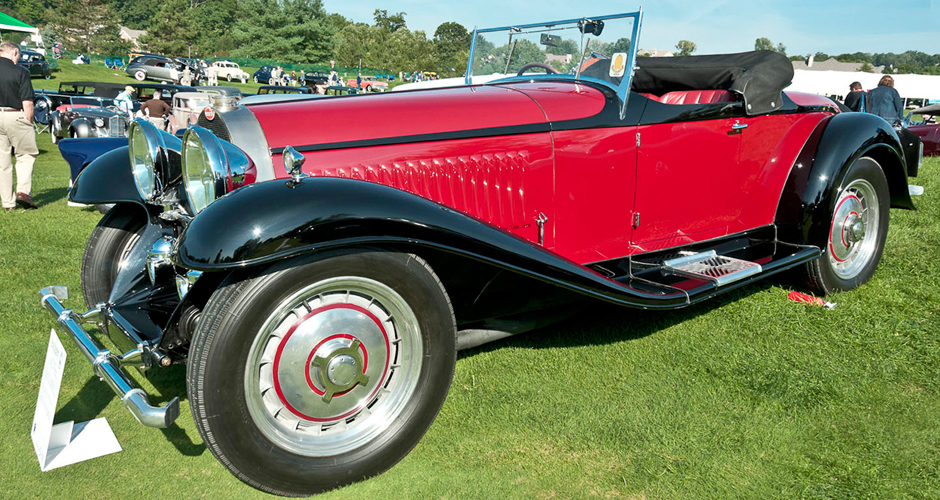 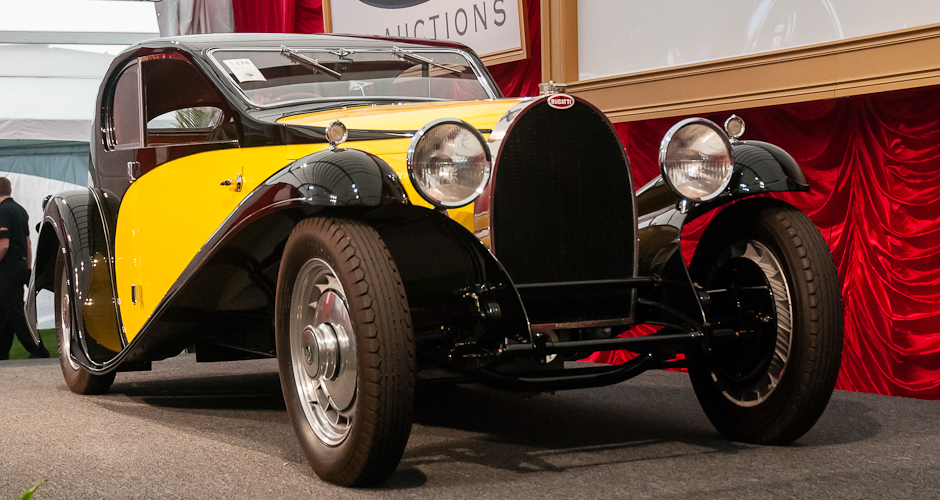 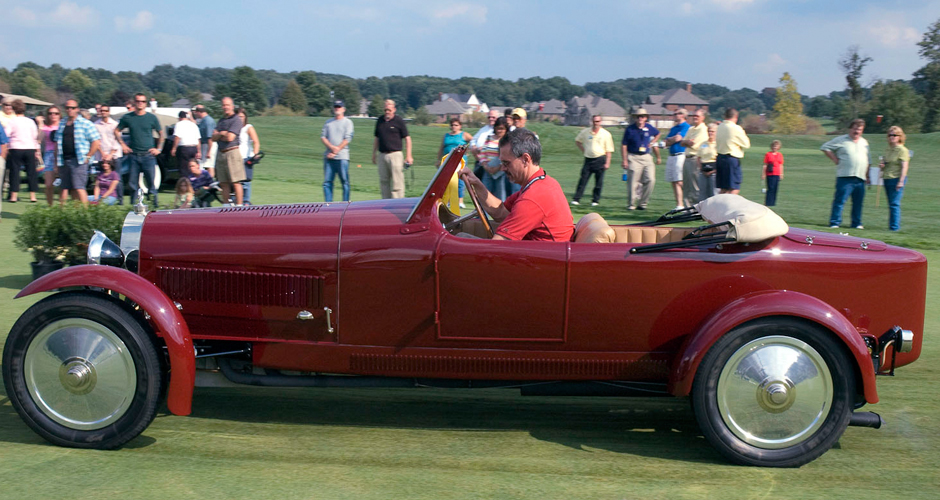 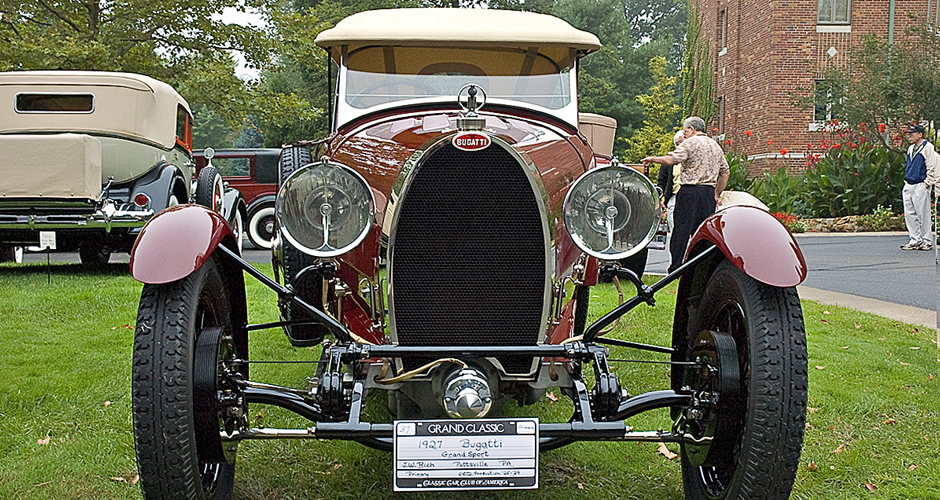