While on the Inland Seas CARavan, I fell in love with Dave Timmons’1937 Razor Edge Derby Bentley, and decided that it sure looked like the ideal touring car...plenty of zip, adequate storage, fun to drive, and good looking.

I first looked for a drop head (convertible in England), but found they were outside my budget. Then I heard about the car in this article. It was in Richmond, Virginia, often seen in the Rolls-Royce Owners’ Club and the Bentley Drivers’ Club, but never active in our CCCA.

This car was ordered in 1937 by Sidney Jelks of Essex, England. He went into service in 1939, and the car was stored until after the war. He, and after his death, his wife used it regularly until it was sold to William Redfern, Jelk’s solicitor (lawyer) in 1972. It was then sold to a London dealer who in turn sold it to Fred Ward of Richmond, Virginia in 1986. At that point it had approximately 78,000 miles.

Fred had the car until 1999, when he sold it to me with just under 90,000 miles. So far I’ve driven the car more than 3,000 touring miles with no problems except for one flat tire.

As previously noted, the car was ordered from Bentley in 1937, then delivered to Freestone & Webb. It is known as a “Derby” (pronounced “Darby”) because it was built in Derby, Bentley’s second of three plant sites.

The car is fully described as a “1937 4-1/4 Derby Bentley Razor Edge Top Hat Sports Saloon,” “razor edge” because of the sharp body and fender corners, “top hat” because the roof is raised over the passenger seat to provide for opera hats, “sports” because it was designed for an owner-driver, with no divider window. “Saloon” is British for sedan. Bentley was purchased by Rolls-Royce in 1931. The engine block is the same as a 25/30 Rolls, but has higher compression and dual carburetion. It has a centralized chassis lube system...like older Packards.

A sister of this car was on the Bentley stand in the 1936 London Motor Show. My car is painted “Duck Egg Green,” the original color, and the striping along the fenders and body is polished bare aluminum. The instrument panel is German Silver. There is a factory installed Motorola radio with antennae mounted under the running boards. It has a tremendous tool kit, built into the boot (trunk) door. The car is basically original, including the leather interior and custom luggage.

Originally published in The Bulletin – courtesy of Northern Lights 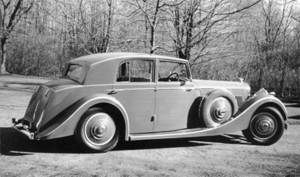 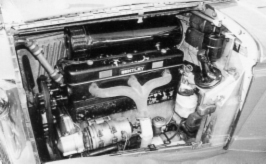 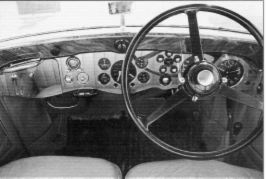