It was beautiful and fast but also impractical. There was no room for luggage. Weather protection consisted of a flimsy rag top and side curtains. When erected, ingress and egress were all but impossible. Occupancy was strictly limited to just two. The marketing department felt it would draw prospective purchasers into the showroom. Yet corporate management had to cajole and sometimes coerce skeptical dealers into accepting at least one for showroom display. 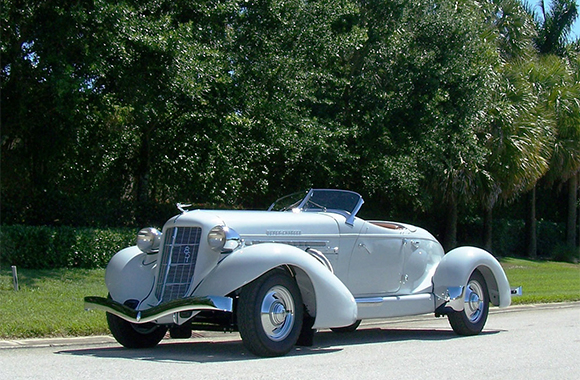 Today, it is a recognized Full Classic® motor car. Admired for its stunning beauty and its ability to outpace just about every other contemporary automobile. It’s a motor car that demands to be driven only on sunny days. The only time the top is erected is on the show field to satisfy the judges. The vehicle is so widely regarded that it commands prices far in excess of one hundred times its original sales price. This is a 1935 Auburn 851 Super-Charged Speedster.

As the garage door slowly rises, a simple one piece chromed bumper comes into view. Then, emerging into sight is a vertical chrome finishing piece at the very end of the boattail. Finally the entire Speedster can be seen and savored. Although the center portion was salvaged from unsold Auburn Twelve Speedsters produced from 1932 through 1934, the new rear-end and Gordon Buehrig designed radiator grill and cowling contribute to a design that is both voluptuous and better proportioned than its predecessor Speedster.

But we didn’t come merely to ogle and drool over the boattailed body. Let’s climb aboard and discover if this gal’s beauty is more than skin deep. By 1935, entry into the front seat of most cars had become much easier. Entry into the Speedster is better than average. The “A” pillar sweeps forward creating a yawning chasm for your feet to slide through, unless you wear size twelve or larger sneakers. Leaning back against the leather seat is quite relaxing. There is welting running horizontally in the upholstery about shoulder blade high. If you feel it stabbing into your back, which is common, find a better upholsterer. This Speedster’s welting is nicely done and doesn’t stab or even tickle.

Starting is fairly conventional. Protruding from the right side of the steering column is the ignition switch which doubles as a steering column lock. Turn the ignition key, pull out the choke knob, depress the clutch pedal, shift into neutral, slightly depress the gas pedal and pull the ignition switch down from “OFF” to “STX.” The engine ignites with a fast idle and a mechanical rattle and roar. It is neither the melodic sound of a Packard nor the raucous roar of a Bugatti.

Alright, the Auburn is running. Depress the clutch and locate reverse gear. The shift lever is long and has between little and no feel until you find a gear. Once reverse is located, pause and then place the shift lever into reverse. Backing out of the garage is no problem. Now outside in the blinding Florida sun, locate low gear which will take a little searching. Once found, depress the accelerator gently. No, don’t give it full throttle. The pedal is very sensitive to the slightest application of foot pressure. This is easily remedied by installing a stiffer spring on the accelerator linkage. But for today, be careful working the gas pedal.

Exiting the garage area, we enter onto a two lane macadam road. The Auburn is equipped with an instrument rarely seen on an American car of this vintage, a tachometer. Unfortunately the needle bobs up and down and is not very useful but it is entertaining. Three easy fixes are: lubricate the inner tach cable, replace the inner cable or relieve any kinks in the cable. Accelerating up to about 15 MPH, a cautious shift into intermediate gear is executed and finally, at about 25 MPH a shift into high gear is completed as we journey down the road.

At an intersection, we stop, look for traffic and turn right onto a very well traveled six-lane street. Accelerating through the gears the Auburn is soon cruising at 45 MPH. A quick look at the odometer reminds us that this car is a fresh restoration with only 25 miles on the clock. It’s not every day you drive a brand new 1935 automobile. A stop light turns red, the brake pedal is depressed and the Speedster comes to rest.

Once the light turns green, the Auburn accelerates smartly and easily keeps up with traffic. Auburns were noted for their performance. In 1927, the Auburn Automobile Company purchased a controlling interest in the Lycoming Manufacturing Company which, among other things, manufactured automobile engines. The engine manufacturer built engines for Auburn, Cord, Duesenberg and several other manufacturers. The Speedster engine evolved from the 1933 top of the line straight eight cylinder engine manufactured by Lycoming for Auburn. Dubbed the GU, it displaced 268.6 cubic inches, was fed fuel through a 1." single throat downdraft Stromberg carburetor and was rated at a very respectable 100 HP @ 3,400 RPM and 210 ft/lbs of torque.

For 1934, the engine was upgraded by boring out the block an additional 1/16 inch for a displacement of 279.9 cubic inches. Furthermore, the carburetor was replaced with a Stromberg EE1 downdraft carb. Although the new Stromberg’s throat was only 1", it had a dual rather than a single throat for better breathing. The new engine also boasted of a higher compression ratio of 6.2 to 1 as opposed to GU’s standard ratio of 5.26 to 1 or optional 5.75 to 1. At the time, fuel could not be compressed at a ratio much greater than 6.5 to 1 without causing premature igniting of the fuel and piston knock.

The new engine also offered an aluminum head and what was probably the finest piston available: the Nelson Bohnalite aluminum piston with invar struts. A nickel-iron alloy, invar was invented in 1896, by Charles Eduard Guillaume. Nelson Bohn applied invar to an aluminum piston. Invar is a low thermal expansion alloy, 36% nickel and 64% iron, providing the piston with the ability to maintain its size and shape at all normal operating temperatures.

The new engine, referred to as GG, was rated at 115 HP @ 3,600 RPM, fifteen more horses than the previous GU engine rating. Another engine attribute is a crankshaft that is held in place by five main bearings without counterweights. However, a Lanchester vibration dampener is located at the front of the crank.

The GG engine is found under the hood of all 1935 Auburns, But Auburn affixed two other standard items to the Speedster engine: Startix, which we will examine later and a Supercharger.

The top of the line 1935 Auburns were called Super-Charged. August “Augie” Duesenberg, brother to the late and better known Fred Duesenberg, was hired to work alongside Auburn factory manager Pearl Watson. Together they adapted a Schwitzer-Cummins manufactured supercharger, developed by Kurt Beier, to the inline eight cylinder GG engine. The supercharger runs at six times engine crankshaft speed. The compression ratio was increased to 6.5 to 1. The blower dramatically increased power to 150 HP @ 4,000 RPM and provided 232 ft/lbs of torque at 2,800 RPM. At low RPM, a supercharger robs a few horsepower from the engine. However, once the engine speed hits around 2,000 RPM the supercharger is putting out more than it is taking and the difference can be felt.

What will she do? The Super-Charged Speedster weighs 3,706 pounds which produces a stunning weight to power ratio of 24.71 to 1. To put this into perspective, see the chart below:

The chart contains a couple of anomalies. The first is why does it include a Pierce-Arrow Sedan and not a lighter Convertible or Coupe? The answer is that there are no reliable published weights but for the Sedan. The other anomaly is how come the Speedster only places a close second to the Auburn Super-Charged Coupe? The answer is that the Coupe, plus a couple of other body styles, weigh marginally less than the Speedster. Nonetheless, the Speedster is very fast and the difference is marginal. Expect a zero to sixty miles per hour time of about 14.5 seconds. The Speedster should top out at just over the century mark and no more than 102 MPH.

We come to a stop sign while motoring down a palm tree lined south Florida road. Pressing down on the brake pedal actuates the Bendix hydraulic brakes. By now most motor cars were equipped with four wheel internal expanding brakes and the Speedster was not an exception. Total braking area is 194.2 square inches which results in a ratio of pounds to one square inch of brake material of 19.08 to 1. The following chart com-pares stopping ability:

Pierce-Arrow appears to win the brake safety contest. Not only does the Pierce Twelve have the greatest ability to stop but the same size brakes were on all their models, many of which were lighter. However, it is now understood that during braking, weight is transferred from the rear axle to the front axle. Therefore, the front brakes are doing most of the work and require a greater breaking ability than the rear set of brakes. Pierce was biased to the rear, viz.: 53% rear to 47% front which somewhat diminishes their supremacy. Cadillac appears to place a distant last. Ironically, it has the best proportion of breaking front to rear, viz.: 60% front and 40% rear. Cadillac was able to get more out of fewer square inches of brake material. The remaining competitors have a more conventional proportion of 50% to 50%. Packard comes in a very close third. Whether taking into consideration or ignoring braking proportion between the front and rear brakes, the pair of Auburns place an honorable second in the stopping contest.

But the way is clear and it’s time to accelerate. The accelerator spring is light and takes getting use to. Apparently you’re not use to it yet as the car stalls. Rather than have to restart the engine, the Startix kicks in almost instantaneously and we are on our way once again. Startix was available from Bendix. It has a relay and a couple of solenoids with movable plungers contained in a little metal box. When turned on, it acts as an automatic starting switch. It also will re-start a stalled engine.

As we continue on our road test, the Columbia Dual-Ratio rear-end intrigues you. In 1935, turning the lever located on the steering wheel changed the rear-end ratio from an in-city 5.1 to 1 ratio to a super highway of the future ratio of 3.47 to 1. Even today, this useful tool effectively creates a six-speed automobile. For most of this trip in the open Auburn, the 3.47 to 1 ratio has been the ratio of choice. The gear change is vague but the synchromesh in the top two gears is quite good. Even the dry single plate clutch isn’t heavy.

Pot holes are uncommon in south Florida but every now and then one turns up unexpectedly, like right now. Swerving to avoid a bottomless pit, the Ross Gear and Tool Company cam and lever steering box turns out not only to be light but relatively quick at 3. turns lock to lock. The conventionally semi-elliptic silco-manganese springs coupled with Spicer Manufacturing Company dual acting shock absorbers offer a comfortable and controlled ride.

We came to determine if this gal’s beauty is merely skin deep. The Speedster’s beauty certainly extends far deeper than her metal skin. As the Speedster is returned to its owner, there is but one regret. Few were made and those few that survived are extremely expensive. But then if you could find an Auburn Super-Charged Coupe, it may not look quite as gorgeous but it would be much more affordable and it would be really fast.