Margaret Dunning, a long-time member of the Classic Car Club of America, who would have celebrated her 105th birthday in June, died as the result of a fall while attending a collector car event in Santa Barbara, California. 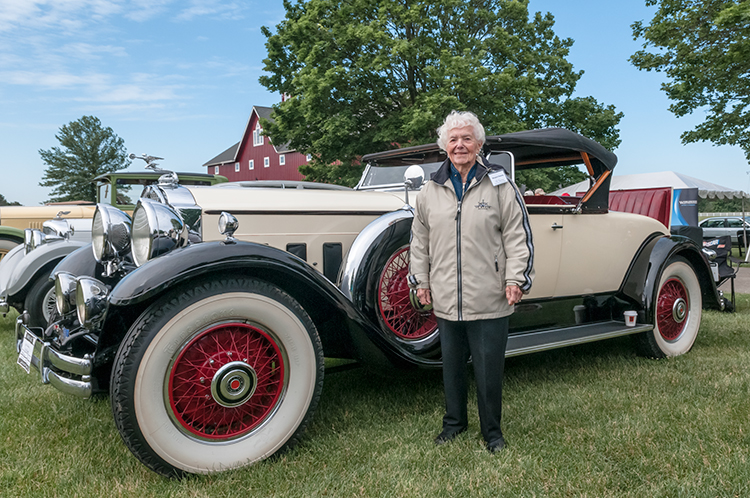 She was often seen at CCCA and other collector car events in her 1930 Packard 740 roadster, which she acquired in 1949 and is believed to be the first 100 point CCCA Classic. She donated a 1930 Cadillac roadster to the CCCA Museum and 1906 Ford model N to the Gilmore Car Museum.

In her hometown community of Plymouth, Michigan, she was known as a businesswoman and philanthropist who helped found and later expand the Plymouth Historical Museum and was involved in many community projects over nearly nine decades in Plymouth.

A longtime resident of Plymouth, where she had lived alone for years, she was known for her love of Classic cars and her ability to not only drive them but maintain them—even as a centenarian. She was a regular participant at Michigan Region CCCA activities as well as the Woodward Dream Cruise and at concours d'elegance events throughout the United States. She had registered for the 2015 CCCA Museum Experience, which will feature Packard.

She was born June 26, 1910, on a farm at Plymouth and Telegraph Roads in Redford Township, to Charles and Bessie Dunning, and moved with her mother to Plymouth in the 1920s. She began driving at the age of eight. He father died when she was 12 and her mother suffered from arthritis, so Margaret became the family driver.

About four years ago she was featured in a New York Times article in which it was noted that she was 30 years older than her 1930 Packard. She was invited to many concours d’ elegance and was accompanied by fellow CCCA Michigan Region members Dan and Joanne Clements.

Margaret Dunning won the 2012 Classic Car Club of America Trophy, presented by Joe and Angela Cantore of Chicago, at the 2012 Pebble Beach Concours de Elegance. Ms. Dunning, 102 years young, stole the attention of everyone in attendance as she bantered with the MC and Jay Leno about her car. Margaret then got behind the wheel of her 1930 Packard, navigated the crowds as she drove the car up onto the awards stand, picked up her award and then drove off. Not an easy feat for even the most skilled driver. Ms. Dunning's car also has the honor of being the very first ever to be awarded 100 points at a CCCA Grand Classic. Margaret is a true Classic.

Margaret Dunning – Queen for a Weekend at Pebble Beach

CCCA Member, Margaret Dunning of Plymouth, Mich., was featured with her 81 year old Packard 740 roadster in a New York Times video. She will be showing the car at the Concours d’Élégance of America.