Jules M. Heumann 1924 – 2017 CCCA member, the renowned Chairman Emeritus and guiding light of the Pebble Beach Concours d'Elegance, Jules Heumann, lost his battle with cancer on Saturday, December 16th at the age of 93 in San Francisco. 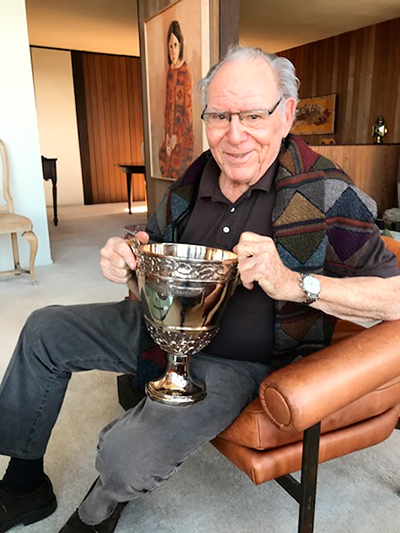 Know simply as J. to a worldwide legion of friends, he was fascinated by the automobile from an early age. He began to tinker with and then restore fine automobiles, showing his first restoration at the Pebble Beach Concours in 1959. He went on to win Best of Show in 1972 with his 1922 Hispano-Suiza, the same year he and his long time friend Lorin Tryon were asked to take on the chairmanship of the then struggling Pebble Beach event. Their perfect blend of talents and knowledge drove the Concours to become the most respected collector automobile event in the world.

"J. ‘got it’ in terms of judging cars,” says the Pebble Beach Concours Chief Judge Chris Bock. “He reached out to marque experts and others with great knowledge and experience, and he established the two-tiered judging system that we still use today—the system that has become the standard of the world."

Starting in 1999 J. served as sole Chairman of the Concours Lorin’s death earlier that year. When he then retired, the well-deserved word Emeritus was added to his title, but he remained an active advisor and he continued to do all he could to share his love of cars with others.

A members of the both Northern and Southern California CCCA Regions, J. and his wife Sally loved to CARavan. Their first CARavan was with a Colorado Rockies tour in the 1980's and became regulars on the Pacific Northwest CARavans for many years.

An internationally renowned expert on the Hispano Suiza automobile, In J. purchased his first Hispano-Suiza in 1963, the marque he later preferred above all others, and amassed a huge archive of historical information on the marque that he generously donated to the Nethercutt Museum library so that it would be available to everyone.

In his non-automotive life J. was Chief Designer and co-owner of the Metropolitan Furniture Company of San Francisco where he was famous for his work designing chairs and other fine pieces.

J. leaves his daughters, Leslie and Jann, his companion, Barbara and a world of devoted friends to mourn his loss. His wife, Sally, and his brother Syl preceded him in death. We celebrate your life—a life filled passion, family and friends

Click here to read the tribute from the Pebble Beach Concours d'Elegance .