Mr. William “Bill” Davis, of Charleston, West Virginia, was presented with the 2011 Lee Iacocca Award at the recent Glenmoor Gathering. The Lee Iacocca Award is presented to people who exhibit “Dedication to Excellence in Perpetuating an American Automotive Tradition;” it is a reward for individuals who contribute to the hobby through their generous actions and their stewardship of old cars.

Bill, 79, has enjoyed a lifetime of involvement in the old-car hobby, and this award celebrates his boundless enthusiasm and willingness to share his knowledge with other car lovers. We spoke with Bill, who explained that he wasn’t aware of the honor of the Iacocca Award. “It took me by surprise at the Glenmoor Gathering. It’s kind of the ultimate ‘good guy’ award.” 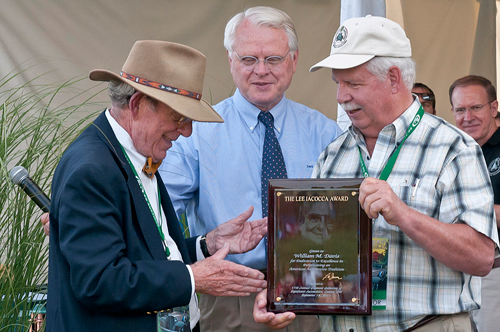 Of the 20 cars in his collection, nine were bought new by him or his family, and nine are two-door convertibles. Considering his collection, Bill muses; “At one time I had 13 Rolls-Royce and Bentley cars, one of every engine: big Sixes, little Sixes, V-12, straight-eight, V-8. It was interesting to see the progression of the engines. I’ve sold some and kept my favorites. I’ve always liked Cadillacs, and the three Oldsmobiles we bought new. When the time came to replace the 1966 Cutlass convertible in 1986 – a car I drove every day for 20 years – GM wasn’t making any convertibles. I was kind of a GM guy, but Chrysler was making them, and I liked the original Town & Country, so I thought, why don’t I get one of these little plastic jobs?” he laughs. “I’ve stuck with Chrysler convertibles, and I’m on my third one.”

He continues, “I’ve always liked Corvairs; I thought they were interesting cars. The Monza, I bought in a snowstorm off a used cars lot. I thought, ‘Why don’t I take that home?’ Cars are a lot like cats; you feed a cat milk, and he’s back the next day. You put gas in a car, and it’s there the next day. I really like the car I’m next to. I’m similar to the people who like stray dogs and cats – they want to take them all in. And I’d really like to give a home to all of the cars that I see and like, but I can’t do that.” 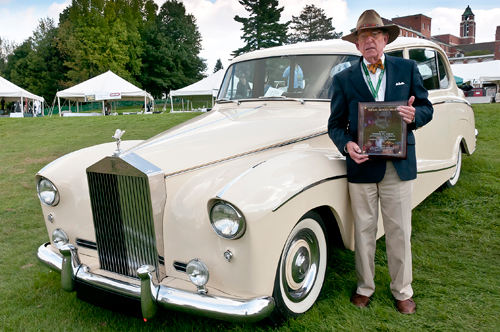 When asked if there’s anything he hasn’t owned, but admires, he answers quickly. “Probably like everybody in this hobby, I love Model A Fords, but I’ve never had one. I think they are absolutely charming cars. There’s something very solid, very nice about them. And like so many people, I like Duesenbergs and things like that, too. I’m at the age now where I simply like the cars I have, and can admire cars I don’t have. My next birthday is my 80th, and I enjoy driving them.

“I’m just another soldier in the trench of the hobby,” Bill says. “I don’t think I do anything special when you look at other accomplishments that people do, but I’m willing to help wherever I can.”